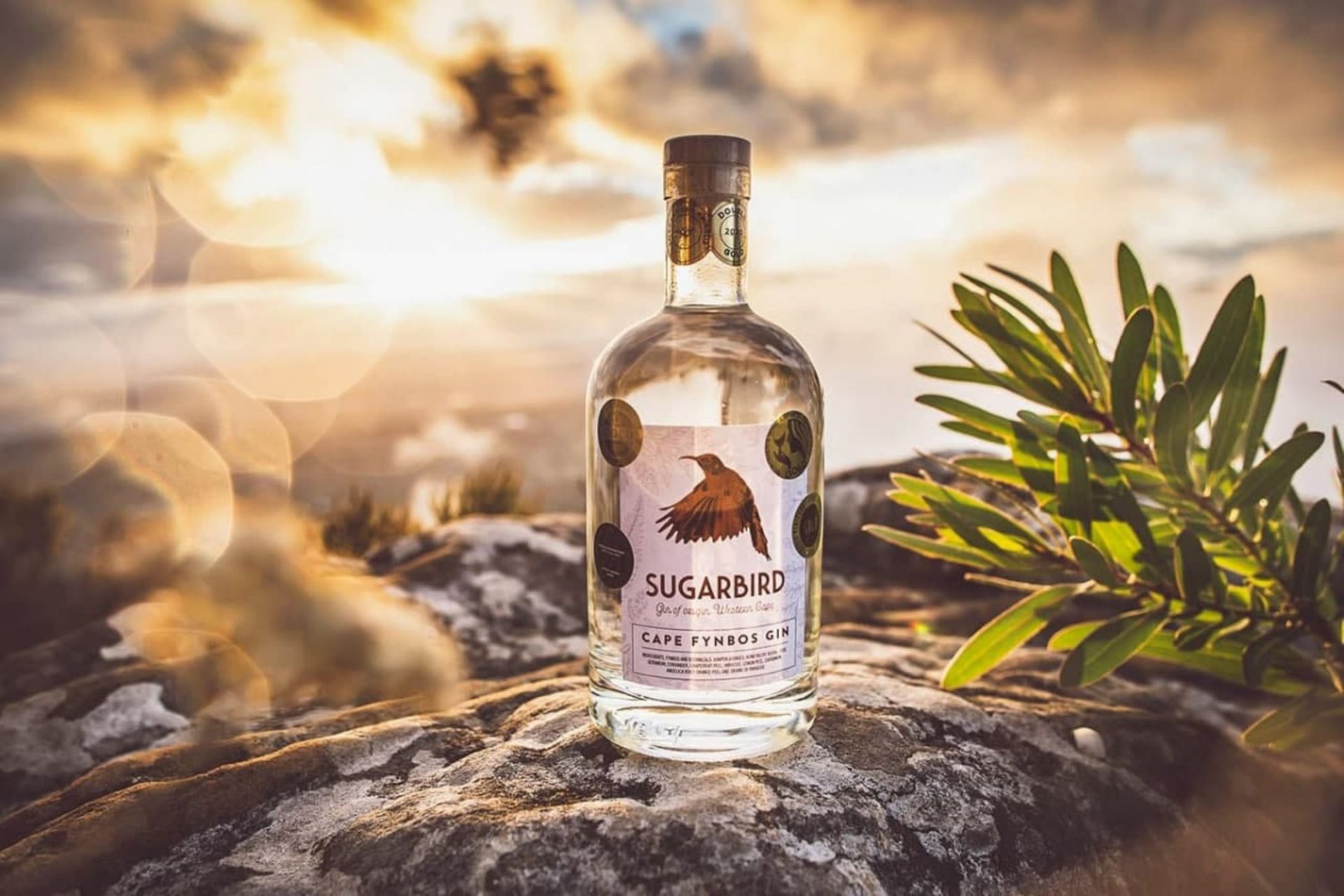 The spectacular Cape Floral Kingdom sits at the south-western tip of Africa. It is by far the smallest, yet easily the richest of the six floral kingdoms in the world.  This unique region, encompassing Cape Town itself, offers an unusual but intricate landscape of flora and fauna.  This floral kingdom is predominantly ‘fynbos’ (meaning very fine bush), and it comprises thousands of different species, which attract multiple insects and birds.

The Cape Sugarbird, synonymous with the Protea, is one of six bird species that occurs only in ‘fynbos’.  Sugarbird Cape Fynbos Gin takes its name from this iconic bird, and important distinguishing elements of its taste profile, from ‘fynbos’.  This symbolic gin has won for its creators the prodigious status of Winner of Luxury Lifestyle Awards  in the category of The Best Premium Gin in South Africa.

The craft spirits’ revolution has been led by gin – after all, it is the perfect candidate, based on its manufacturing history, ingredient complexity, and subtleties of flavor.  By the time that Sugarbird gin was founded, at the end of 2017, the craft gin explosion was, in fact, well on its way to becoming a ZAR billion a year industry, and South African gin producers, specifically those in the Western Cape, had begun to make waves in the global renaissance.  Perhaps not surprising, given the vast array of fynbos species, 70% of which are found nowhere else in the world.

Sugarbird’s goal was to augment the traditional gin ingredients (Juniper, Grains of Paradise, Coriander, Angelica, Cardamon, etc.) with these unique, flavorful, and diverse “fynbos” plant species, bringing something special to the gin.  Crafted over many months, the focus of the first varietal (Sugarbird Original Fynbos) was on creating a gin with a perfect balance between floral and citrus notes.  As a result, juniper took rather a back seat.  The most distinctive fynbos hero is Agathosma betulina (from the Buchu group of ‘fynbos’), the leaves of which are carefully harvested at a particular time of year, to ensure the minty camphor freshness that juniper normally brings.

One of Sugarbird’s founders, who has a Doctorate in Science, takes a tireless interest in the fynbos species, and quaintly uses only the Latin names to describe the varietals. His continual experimentation results in a constant supply of new combinations and flavors, and not only for gin. The company has, in fact, just launched a rare 14-year-old pure potstill Brandy that is trickle-filtered through honeybush and other Cape botanicals.  Sugarbird’s XO Brandy gives a new dimension to traditional South African brandy.

In the process of researching and determining industry leaders, the Luxury Lifestyle Awards experts took into account not only the impeccable quality of Sugarbird Cape Fynbos Gin products, but also an unconventional approach to business organization. The Sugarbird team is characterized by bold, innovative solutions and unexpected collaborations to showcase the quality of its products.  The company developed 40ml and 50ml mini bottles for gin from recycled PET, which resulted in a cost reduction and a favorable impact on the environment.

In an effort to provide consumers with not only value, but also as much choice and variety as possible, Sugarbird began collaborating with its competitors – South Africa’s most creative craft gin producers.  Thus “Sugarbird & Friends” was born by creating unique multi-brand packages of 5, 9, 12, and 24 x gin minis.  Sugarbird undertook selling, design of packaging, label re-design, procurement, bottling, packaging, logistics, finance, and merchandising.  In one year, the company sold more than a quarter of a million minis in this way, giving customers a new experience and allowing South African brands to expand their audiences and gain recognition.

“We are delighted that our handcrafted gin, on which we have been working for quite some time, has gained recognition, among both customers and industry experts.  Winning the Luxury Lifestyle Awards is a reason to be particularly proud of our local distilling tradition, which has now been recognized at such a high level”, says Matt Bresler, MD of Sugarbird Cape Fynbos Gin.