Kusmi Tea: Exclusive Tastes and Aromas that Last for Centuries 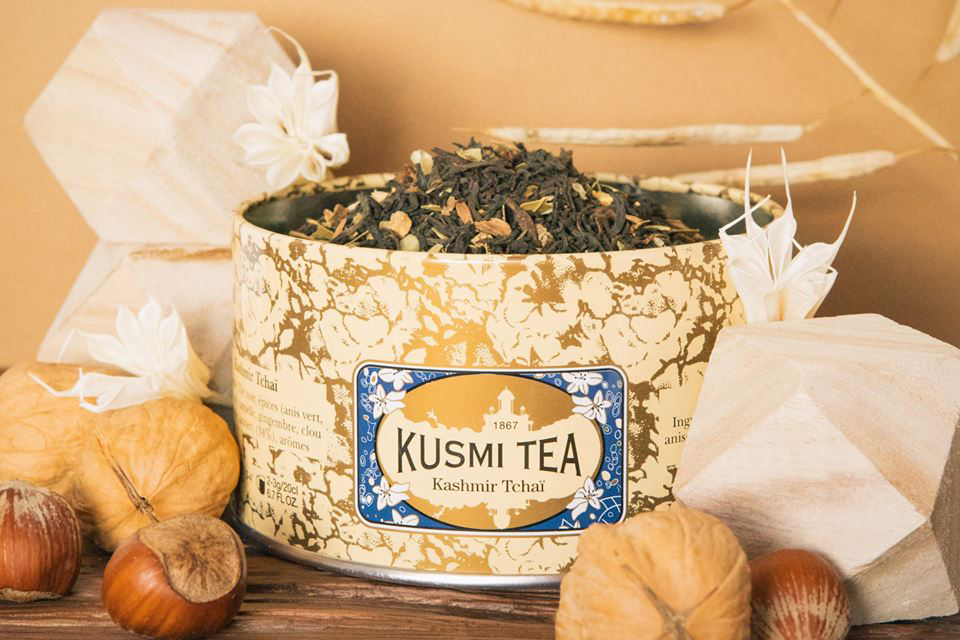 Not many brands can boast such an interesting and eventful story. To witness the last monarchs of Russia and the fall of the Empire, to go through two world wars and to meet the greatest successes in the 21st century – this saga of Kusmi Tea is still far from over. For more than 150 years the best masters have been creating the treasury of the most exquisite tea tastes and aromas. In this unique treasury, there is an outstanding exemplar, a precious white pearl – Le thé blanc Alain Ducasse, Kusmi`s first white tea, the result of the collaboration between Kusmi Tea and the chef Alain Ducasse.

In the beginning was the Tea: royal success, emigration, ownership changes

The long journey of Kusmi Tea began in 1867 in Saint Petersburg, when Pavel Kousmichoff, a young man from a peasant family, became the owner of a small tea house. That was a wedding gift from his employer, a tea merchant, who was impressed by Pavel`s potential and became his first mentor in the art of tea blending. The new tea house is a huge success. The fragrant combinations of Chinese tea, cloves and citrus zest become the favorite drinks at the Czar’s court. In 1880 Pavel creates a tea blend “Bouquet de Fleurs” for his daughter Elisabeth, and in 1888 he presents the blend “Prince Vladimir” in honor of the 900th anniversary of accession to the throne of Vladimir the Great, ruler of Holy Russia. “Prince Vladimir” eventually became one of the most recognizable blends of Kusmi Tea. 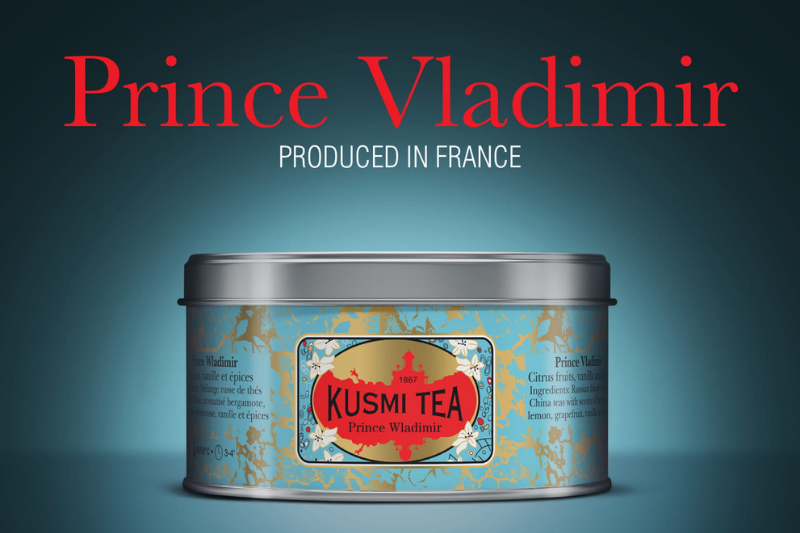 By the end of the 19th century, Pavel Kousmichoff opened 11 offices in Russia, and the fame of his tea house gradually reached Europe. In 1907 Pavel decides to send his successor, elder son Vyacheslav, to London known as the tea capital of Europe. Here Vyacheslav becomes a tea expert and proves himself as a talented businessman: under his leadership, opens P.M. Kousmichoff & Sons, the first British subsidiary.

The Russian revolution of 1917 forces the Kousmichoff family to continue the tea expansion. They start with Paris: the new workshop is located at 75 Avenue Niel (today it is known as Les Ateliers K and serves as a training space for Kusmi Tea staff and partners). The capital of France also becomes the birthplace of the Kusmi Tea house.

In the next ten years, the Kousmichoffs` business prospers mainly thanks to representatives of the Russian emigration in France. Kusmi Tea opens new shops in New York, Berlin, Hamburg, Constantinople; the new subsidiaries of the tea house appear in prestigious neighborhoods of major European cities – from London to Zagreb. Vyacheslav nevertheless moves the main business to Berlin considering the large Russian population in this city. 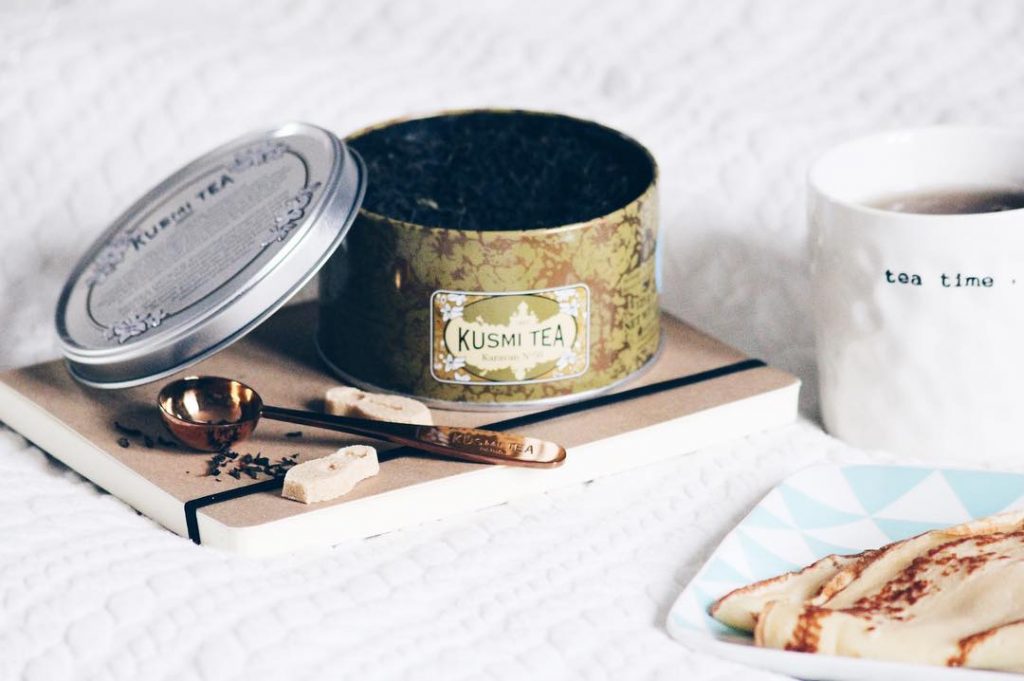 In 1946, right after World War II, Vyacheslav Kousmichoff passes away, and his son Constantine takes over Kusmi Tea. The post-war period was a difficult time for everyone: most of the Russian emigrants left Europe, the local population had to live frugally, and the demand for luxury teas dropped off dramatically. Constantine believes that Kusmi tea should not be a mass consumer product, because his family produced recipes only for selected members of society. Being more an artist than a businessman, Constantine misses a chance to take advantage of economic growth in the 1960s in France and to expand the business, resulting in losing popularity of his tea house. In order to avoid bankruptcy, the last of the Kousmichoff family is forced to sell the company. The new owners are struggling to keep the tea house afloat until the end of the 20th century.

The new era of Kusmi Tea began in 2003 when successful entrepreneurs Sylvain and Claude Orebi bought the company. The Orebi brothers examined all classical recipes of the tea house, selected the most popular ones and diversified assortment by adding new types of tea and creating 100 different blends. It took them a little over a decade to tenfold increase in sales, open 115 boutiques in 35 countries and employ over 700 people worldwide. 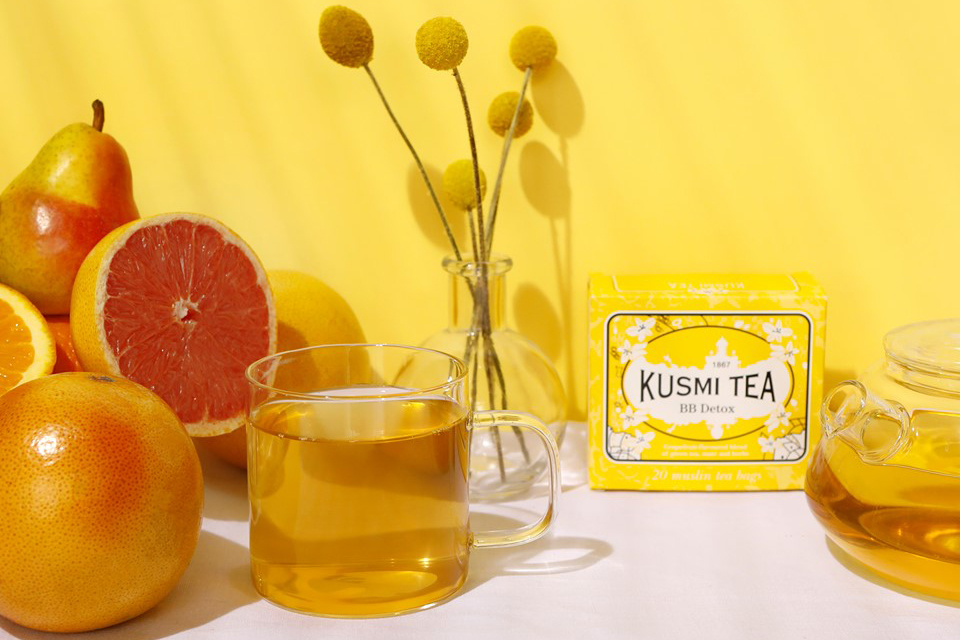 Being attentive to modern world issues, Kusmi Tea is much more than just a luxury tea brand. One of the company`s side activities is protecting women. It is women who make up a majority of Kusmi Tea and its clientele. No wonder that the company takes care of the women. Three years in a row the brand supported those affected by breast cancer – for instance, part of the proceeds of the best-selling blends was donated to local associations in different countries. Since 2011 the company has been a partner of the Women’s Forum for the Economy and Society – an event that highlights the voice and vision of women on the key economic and societal issues in the world. 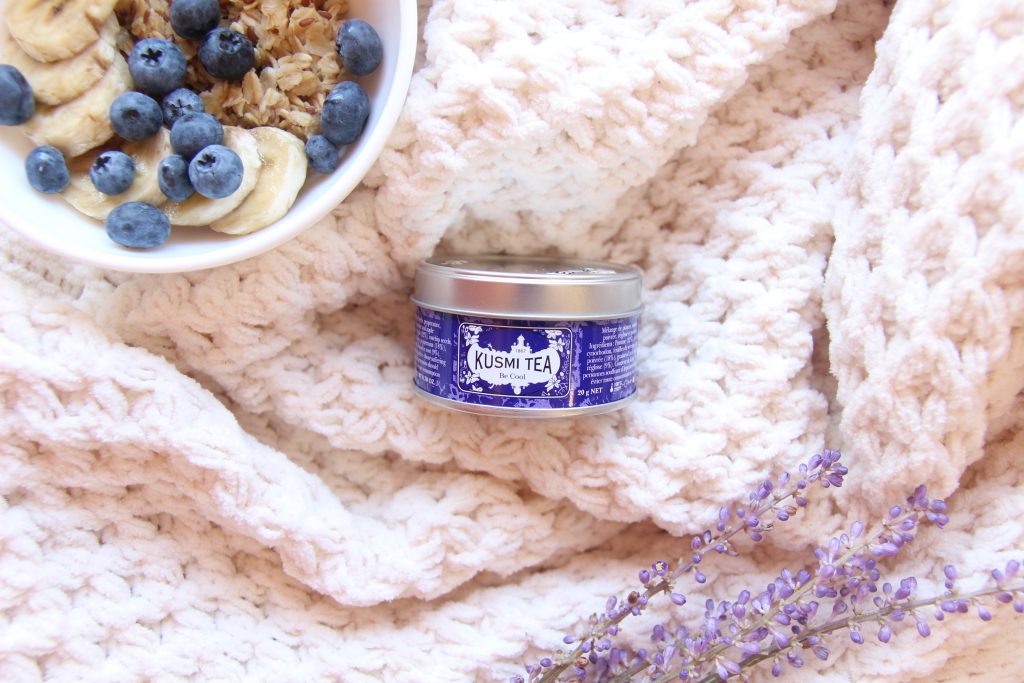 Kusmi Tea is also proud to work in partnership with WWF France on two interesting projects. The first one is aimed at doubling the wild tiger (the animal that is deeply connected with the tea-producing regions) population and reaching 6,000 wild animals by 2022. The second project is connected with significantly increasing the purchase percentage of organic and responsibly produced tea. Kusmi Tea is moving towards environmentally friendly tea producers and suppliers with the support of WWF France. 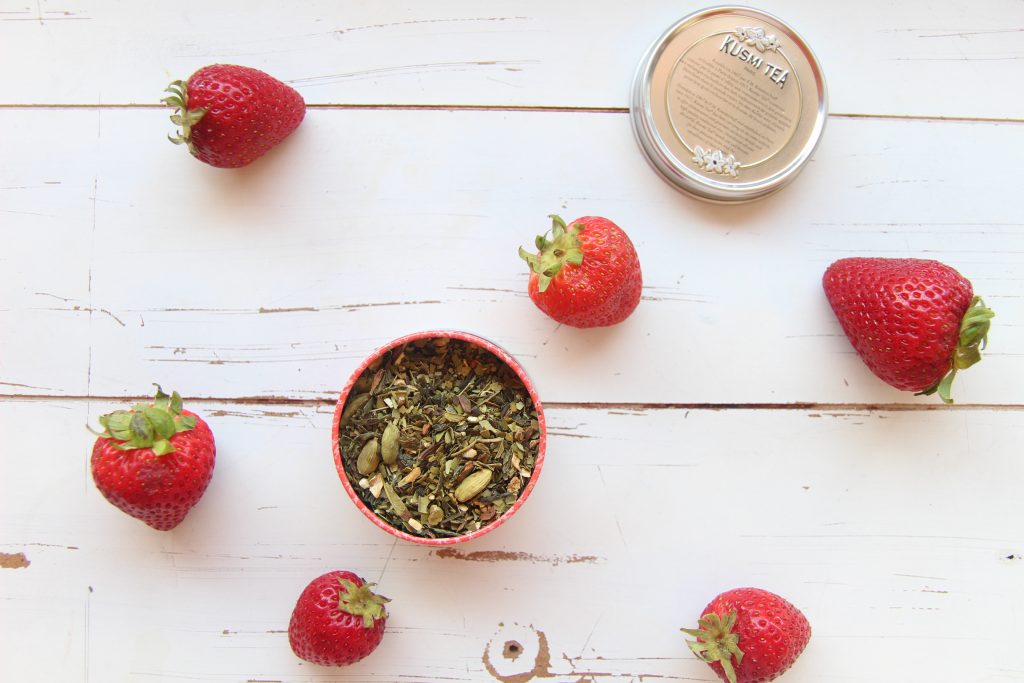 Assortment: for tsars and wellness lovers

Kusmi Tea is best known for its iconic recipes – more than 100 varieties including pure classics and the most original blends. The imported whole tea leaves and carefully selected premium ingredients are used for making each of these teas.

The first family of Kusmi teas was the “Russian Flavour” – the exclusive blends of the pure black teas and citrus. The surprisingly scented recipes of Prince Vladimir, Anastasia, Bouquet de Fleurs, St Petersburg, and Troika became the gourmet expression of the spirit of the Russian Empire.

The classical black teas at Kusmi are presented with Ceylon, Earl Grey and Darjeeling, blended with subtle scents of Bourbon vanilla, red berries, and caramel. These are original and refined tastes of the good life. 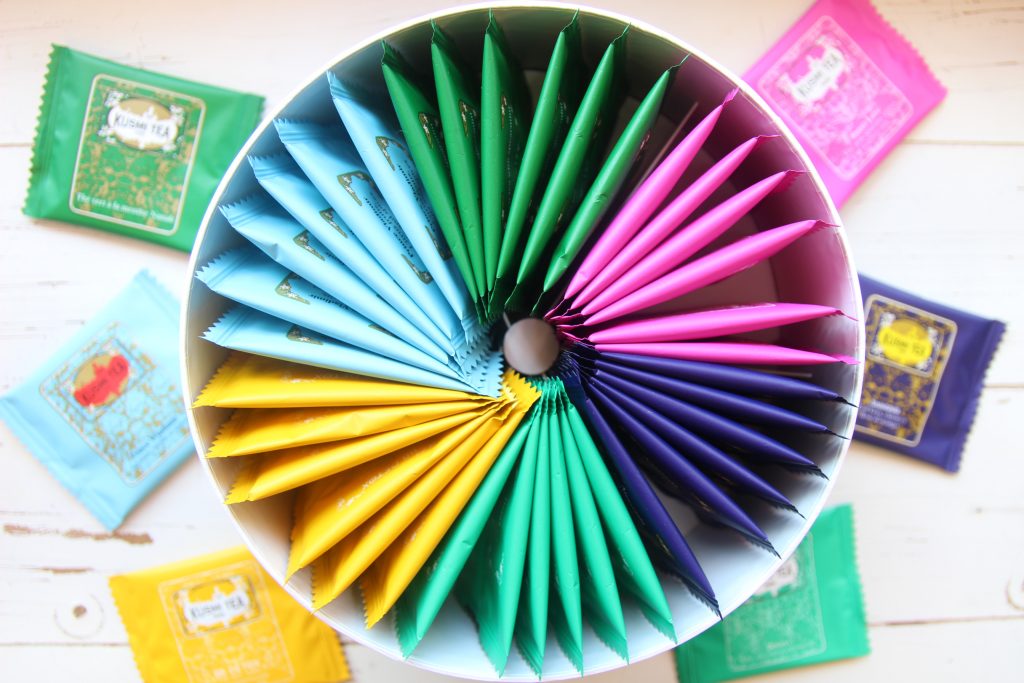 The Kusmi`s classic green teas remind a fragrant garden with a variety of subtle mixtures of rose, jasmine, almond, and mint. Sip by sip, like step by step, for several precious moments they make you forget about where and when you are, leaving you tete-a-tete with the Taste.

The wellness blends exemplify the new era of Kusmi Tea. These surprising and delightful energizing teas combine delicious notes with well-being. The Detox tea represents a blend of green tea, yerba mate and lemongrass; Blue Detox tea is a combination of green tea that has been re-interpreted with rooibos and exotic pineapple notes; in BB Detox a note of grapefruit elevates combination of mate, fennel, dandelion, and rooibos. Each of these teas is a perfect reason for you to take a little time for yourself every day. 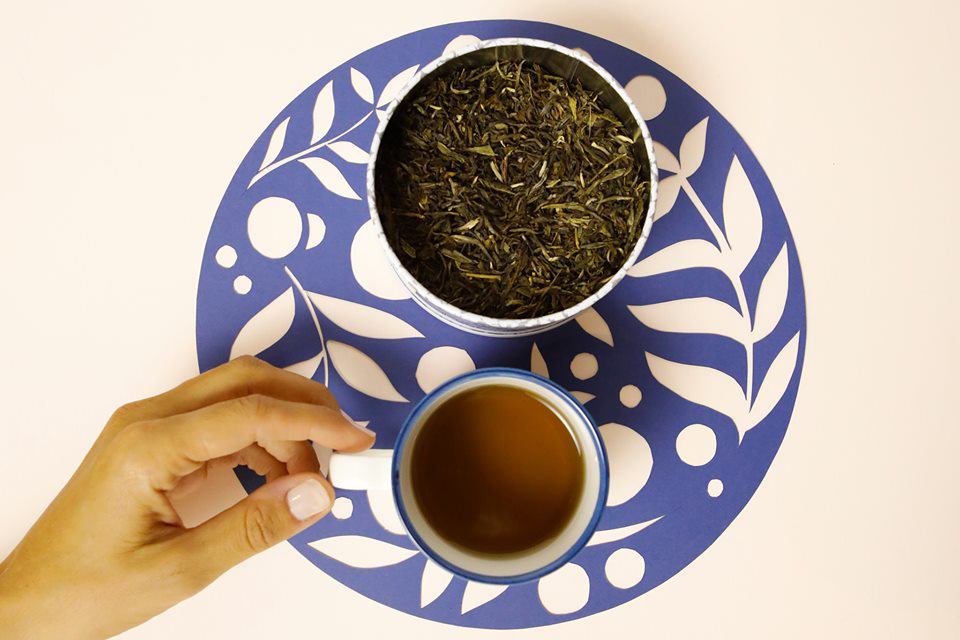 Kusmi`s white tea: first collaboration and returning to the roots

For the century and a half of Kusmi Tea`s history, there was one blank spot in the brand`s assortment: white tea. The 150th anniversary seemed to be the perfect occasion for experimenting and creating something completely new. Sylvain Orebi proposed a collaboration to the French Michelin-starred top chef Alain Ducasse. And the result of this experiment is a true masterpiece of taste and flavor – Le Thé Blanc Alain Ducasse (Alain Ducasse White Tea).

The blend includes green tea delicately scented with hints of rose petal and raspberry – flower and fruit, in the best traditions of Pavel Kousmichoff`s recipes. The tea is made of from the earliest leaves and buds that sprout every spring. The pickers have a small window of opportunity to get these ingredients, and the harvesting takes place only once a season. Knowing that may cause a sense of occasion while tasting this precious blend. 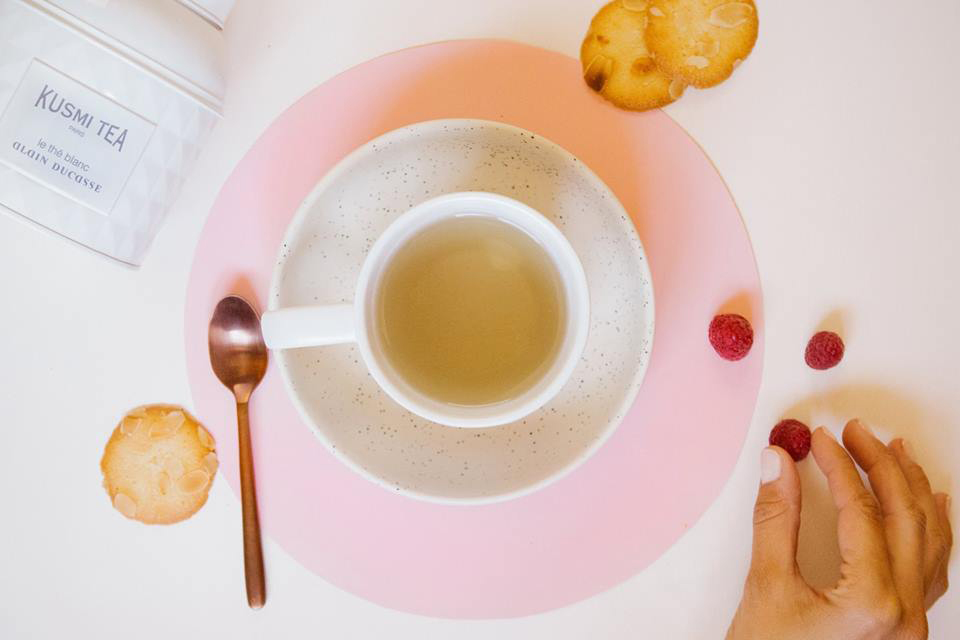 The taste and aroma of the anniversary tea are designed to express purity and freshness, so is the tin, used as a package. This immaculate white box is decorated with thousands of diamond-like facets that complement the preciousness of your tea. The package is made in the Paul Lagache factories, an old house known for making beautiful boxes.

There is also a gift set, which would be a perfect present for true tea lovers. The set contains the 120 g tin paired with an exclusive mug, decorated with the same thousand of facets.

Alain Ducasse White Tea is a very special blend for Kusmi Tea for many reasons. The company nevertheless never stops experimenting and searching for new ideas, flavors, and aromas. This means that the tea mug will never be empty, and the saga continues!